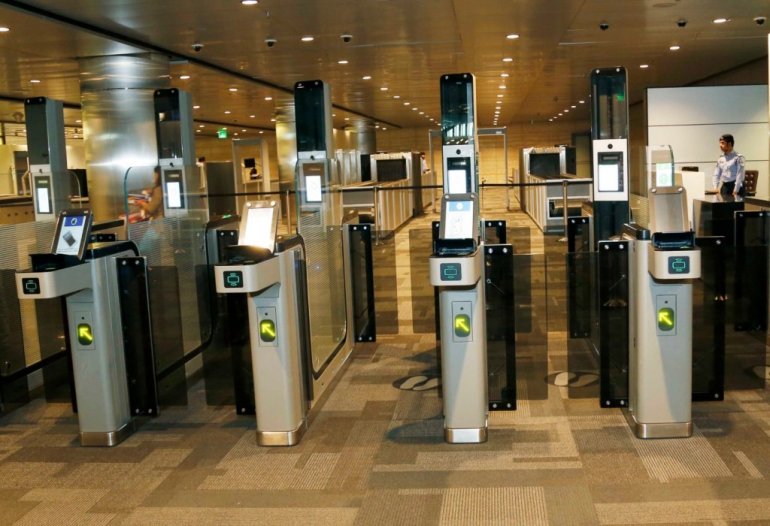 According to recent statistics, about 70 % of the passengers including the citizens and the residents prefer using the e-gate service at the Hamad International Airport.

Currently, children under the age of 16 can not avail the e-gate service since they are not permitted by the immigration procedures that are in place. But a senior ranking official from the Ministry of Interior’s Airport Passport Department, states that the department’s aim was to raise the number to 100 % passengers in the near future.

Yesterday on the local radio, Captain Abdullah Mohammed Al Jasmi, Head of Administrative Affairs of Airport Passports Department announced that their department had planned to add about 40 more e-gates at the exit terminal and that they had planned to expand the provision to the visiting travellers as well in the future.

Answering to the multiple queries as to how their  department had planned to tackle the difficulty faced by families that were travelling with children under 16 years old, he stated that the department has launched a ‘Family Registration Program’, where the parent would be required to register his/her children into the program and avail the e-gate services via the family counter that has been set up.

“As for those who are still not acquainted with the e-gate service, there are constant staff from the airport administration and passports present at the e-gates to assist them with the process”.

Al Jasmi further confirmed that Hamad International Airport had multiple provision available for travellers with special needs, medical requirements and for the elderly travellers as well.

He further elaborated that the airport has special staff at bay, to assist the travellers who need assistance and that there were provisions of special counters where their transactions would occur more swiftly.

He also announced that the airport had plans to incorporate more e-gates with larger capacity but designed with the special needs travellers in mind.

First Lieutenant Saleh Hamad Al Marri, an officer of the Airport Security Department stated that the Hamad International Airport is fenced around by land and sea with highly sensitive sensors in place. He further elaborated that all the sensors were connected to a control room which was constantly supervising and generating reports for the patrols to look into.

All these efforts are a part of Qatar’s vision to make itself more accessible to the world. With an aim to open its air, land and water to visitors from all across the globe, these e-gates will aid and image Qatar’s perception in the global travel industry as a country with friendly borders and open arms. With an easy entry to the country along with the recently relaxed visas regulation, Qatar is bound to become a holiday destination spot for travellers keen capture the essence of Qatar’s culture!